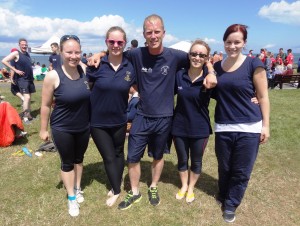 This week saw the ‘Dún Laoghaire’ make the long trip north to the wilds of Skerries, for this new club’s first regatta (2013 was called off due to weather). For many of our gang it was the first trip to the North Dublin town, but hopefully not the last.

Our 11 crews braved some difficult conditions at times, with particular mention owed to our fearless Under-16 boys who rowed through monsoon rains in their first ever regatta!

The first medals of the day went to our Novice Ladies (3rd), with half the crew rowing their first ever race.

Our Under 18s were next to the podium with a hard fought Silver. Well done lads. There’s a great future for this crew.

Our Junior men renewed their rivalry with their Wicklow counterparts, but this time around came off second best.
In the Junior Ladies’ race, where we have two crews rowing, the ‘lead crew’ kept up the pressure on a season medal with a 3rd place finish. Our Senior Ladies also took home bronze in their race. 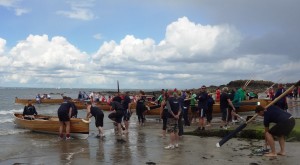 The much-punished club gazebo became very popular during the downpours and squalls, and was most definitely pushed to its capacity. All in all, it was a fine day out in the northern latitudes, and a most pleasant change of scenery.